“Rarely has anyone matched the probing manner of developing a thriller to the degree that James has accomplished.” —San Francisco Review of Books 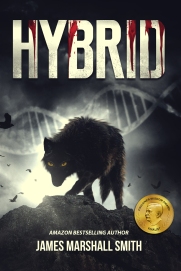 HYBRID has been an AMAZON BEST SELLER since its publication.

Once he’s on your scent, it’s too late to run …

HYBRID: A Thriller in a nutshell:

Dieter Harmon—a newcomer to the West, struggling to establish his veterinary practice—discovers the mutilated body of a hiker. The corpse has been severely mauled; the head hangs from the neck by a single strip of tattered flesh. But what terrifies Harmon are the claw marks on the victim’s chest. Something has gone horribly wrong with the government’s plan to restore wolves to Yellowstone.

As he seeks answers, Harmon is drawn into an escalating battle with the chief park ranger, an obsessive man who will go to any extreme to defend wolf restoration—his dream project. For the ranger, this fight is personal. And “accidents” happen in the high country all the time.

While Harmon hunts the wilderness of Yellowstone for a killer wolf breed that shouldn’t exist, he soon realizes that he’s being stalked by two predators—very different in nature, but both equally deadly . . .

HYBRID was a Finalist for the 2017 William Faulkner-Wisdom Novel Award.

What they are saying about HYBRID: A Thriller—

“Smith peppers his story with chilling scenes . . . [his] writing is full of evocative language . . . A creature feature that earns its suspense by rigorously developing its characters.”—Kirkus Reviews

“One of the year’s best thrillers. Exhilarating and original . . . Cerebral, complex and yet heart-pounding, Hybrid teeters at a full boil throughout. A Finalist for the 2017 William Faulkner-Wisdom Novel Award, Hybrid is a must-read.”—BestThrillers.com

“. . . a compelling thriller when mixed together in a vivid story backed by James Marshall Smith’s science savvy and attention to crafting exquisite tension and detail into his story.”—Midwest Book Review

“Hybrid is a taut, suspenseful tale of vengeance, deceit, and man’s folly in believing humanity is top of the food chain . . . in the vein of Jurassic Park . . .”—Manhattan Book Review

“The plot was super fun . . . a fast-paced, entertaining read that will keep you on the edge of your seat.”—San Francisco Book Review

James Marshall Smith’s debut novel Silent Source was an AMAZON BEST SELLER and Top 10 in Hot New Releases among medical thrillers by the second week of its release.

Available from AMAZON and wherever fine books are sold.

Silent Source was a finalist in international competition for the Clive Cussler 2015 Grand Master Award.

San Francisco Review of Books, October, 2017: “Rarely has anyone matched the probing manner of developing a thriller to the degree that James has accomplished. This is a brilliant book, one that clearly belongs on the bestseller list for the year!”

SILENT SOURCE was named, along with Stephen King’s End of Watch, as one of the BEST THRILLER Novels of 2016. (http://BestThrillers.com ).

SILENT SOURCE was selected as a short-list finalist for the 2016 CLUE Awards, which recognize emerging new talent and outstanding works in the genres of Thriller and Suspense Novels.

SILENT SOURCE in a nutshell:

Forensic mastermind, Dr. Damon Keane, investigates a series of bewildering cases of a fatal syndrome—a slow, excruciating death —cropping up in Atlanta. Now a priest is dying at Grady Memorial hospital. Delirious and in torment . . . hints of torture carried out within the walls of his sacred church. The only clue for the crime is the dying priest’s rosary beads: they’ve miraculously turned the color of blood. But Keane knows he’s not chasing something supernatural. He’s pursuing a killer—a man twisted by anger and a lust for vengeance.

The mystery races from Atlanta to London’s Hyde Park to the edge of Siberia, a place once home to the world’s most secret atomic city, now mecca for the international nuclear black market.

The killer is making chilling preparations to unleash a cloud of death over the city of Atlanta. Keane is always one step behind. Time is running out.

Damon Keane has learned by now that the only way to take down this sinister madman is to outmatch his cunning in a face-to-face showdown.

It’s a bustling holiday weekend at the world’s busiest airport . . .

Over 500 ratings on Goodreads, averaging 4+ Stars

Book giveaways at Goodreads.com has generated over 8,000 entries to win a copy

What Book Reviewers around the U.S. are saying:

“One author has succeeded to make me feel the way James Marshall Smith’s writing makes me feel, and that author is James Patterson….The plot is complex, and the characters are monumentally conceived and masterfully sculpted. James Marshall Smith is the master of suspense, and he knows how to use it to build the tension in readers. . . This is one of the stories you won’t put down easily. Marshall Smith’s charm is irresistible and his characters memorable.” —Romuald Dzemo, Manhattan Book Review (5 Stars)

“Smith spins an unsettling story in his stunning debut. Amid an equally stunning and colorful cast, Smith zeroes in on his principal character, Damon Keane. A highly intelligent and talented man with a troubled past … Smith’s fictional narrative is a balanced mix of engaging dialogue and rich and often time hilarious metaphors that are woven into a flurry of unpredictable, nail biting, and clock-ticking scenarios … Silent Source is not only a top of the line read, but also one that should be on the Silver Screen.” –Anita Lock, San Francisco Book Review (5 Stars)

A first-rate medical thriller that establishes new author James Marshall Smith as one of the year’s best newcomers … In a genre full of eccentric detectives and narrative gimmicks, author James Marshall Smith distinguishes [Dr. Damon] Keane with the plausible investigative processes he employs to get his answers. All Keane needs is a worthy adversary, and Smith gives him an exceptional one … The ensuing race against the clock spirals into a breathtaking and readily believable global manhunt. . . If you like medical thrillers based upon actual science, put Silent Source at the top of your reading queue.–BestThrillers.com (5 Stars)

“James Marshall Smith’s ability to take the microcosm of one man’s crime spree and turn it into a wider-ranging threat demonstrates the difference between an investigative murder story and a thriller whose events include world-changing ramifications . . . . a thriller that will thoroughly immerse any genre fan seeking hot action and heart-pounding adventure.” —Diane Donovan, Senior Reviewer, Midwest Book Review

“ . . . fast-paced action, which spills out of Atlanta and into Russian Siberia, as the prime suspect seeks to further his alarming, deathly goals. The author does successfully connect these seemingly freakish deaths to a larger tale of international intrigue . . .”–Kirkus Reviews

“Rarely has anyone matched the probing manner of developing a thriller to the degree that James has accomplished. This is a brilliant book, one that clearly belongs on the bestseller list for the year! ” —Goodreads review

“Don’t pick up this book unless you’ve got the afternoon off. You won’t be putting it down again anytime soon. James Smith has captured adventure in a bottle. I’m already waiting for the next one.” —Jeff Edwards, award-winning author of Sea of Shadows, Dome City Blues, and The Seventh Angel

“Unlikely heroes with smarts and soul, villains with dimension and resolve, and action to boot, James Marshall Smith nails the scientific action-thriller head on. You are in for a hell of a ride from start to finish. Silent Source literally turns the pages by itself!”–Peter Greene, award-winning author of Warship Poseidon and Castle of Fire, and Director of the Clive Cussler Society’s Adventure Writers Competition.

“. . . a really terrific story with tons of suspense, expertly interwoven plot threads, and interesting characters. I was hooked from start to finish and sorry to see it end. . . . This story is absolutely begging to become a movie.” —Gloria Boyer, GFB Editing

“I had can’t-put-the-book-down-syndrome with this one. This was a very edge of your seat, just one more page book. I found it very well written, with a good, believable storyline . . . Lots of unexpected twists and turns held my attention.” —Goodreads review

This site uses Akismet to reduce spam. Learn how your comment data is processed.